He said the missiles were ‘short-range,’ commonly used by many countries, and therefore did not pose a threat to the U.S.
President Trump downplays last week’s missile tests by North Korea. 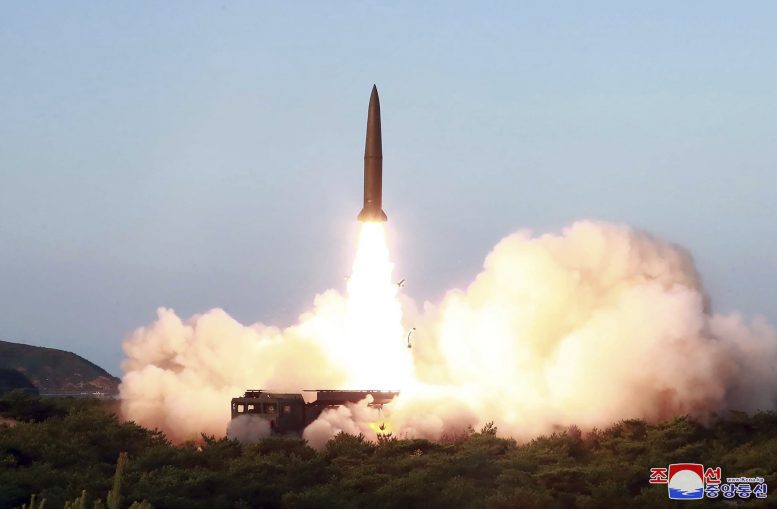 Last week, during a press conference the President said the incident would not interfere with U.S. North Korea negotiations.

North Korea successfully test fired two short-range missiles last week in an apparent warning to South Korean military warmongers.
In fact, the President went on to tout his healthy working relationship with Chairman Kim Jong Un, saying the relationship remains in good condition and the tests were not carried out in bad faith against the U.S.
“He didn’t say a warning to the United States. I can tell you that. he didn’t say a warning to the United States” President Trump said.
“They are short range missiles and my relationship is very good with Chairman Kim and we’ll see what happens. But they are short range missiles, and many people have those missiles” President Trump said.
This Thursday, July 25, 2019, photo provided on Friday, July 26, 2019, by the North Korean government shows a test of a missile launch in North Korea. A day after two North Korean missile launches rattled Asia, the nation announced Friday that its leader Kim Jong Un supervised a test of a new-type tactical guided weapon that was meant to be a “solemn warning” about South Korean weapons introduction and its rival’s plans to hold military exercises with the United States. Independent journalists were not given access to cover the event depicted in this image distributed by the North Korean government. The content of this image is as provided and cannot be independently verified. Korean language watermark on image as provided by source reads: “KCNA” which is the abbreviation for Korean Central News Agency. (Korean Central News Agency/Korea News Service via AP)